Why don't quadrant figures match the figures on an FAA sectional chart?

A common question is regarding the values shown in the quadrants on the Jeppesen base charts that are used in the AOPA Flight Planner. 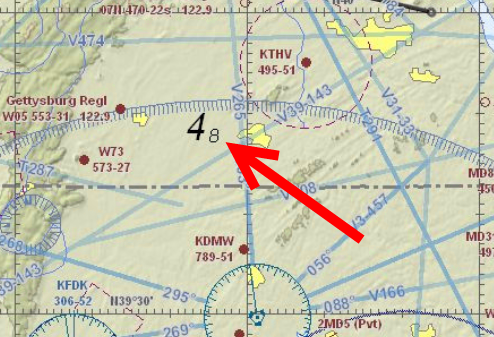 On sectional charts, these are MEF values (Maximum Elevation Figure), while on the Jeppesen base charts, Grid MORA values (Minimum Off Route Altitude) are used. There is resemblance in how these two different values are represented on the charts but that is the extent of their similarity.

MEFs (Maximum Elevation Figures) and Grid MORAs (Minimum Off Route Altitudes) are like apples and oranges. They’re both a type of aeronautical “fruit”, meaning they represent a height or altitude) but that’s where the similarity ends. The complication lies in the fact that MEFs are depicted in a similar way as Grid MORAs using large, superscript text fonts. This similar appearance contributes to misinterpretation and misunderstanding.

An examination of the facts will reveal and substantiate the reason why Jeppesen captures, maintains, applies and outputs Grid MORAs ONLY instead of MEFs.

Definition MEF (FAA):
Maximum Elevation Figure (MEF): The Maximum Elevation Figures shown in quadrangles bounded by ticked lines of latitude and longitude are presented in Thousands and Hundreds of feet above mean sea level. The MEF is based on information available concerning the highest known feature in each quadrangle, including terrain and obstructions (trees, antennas, etc.)

SUMMARY:
For all the reasons outlined above, Jeppesen maintains and applies Grid MORAs ONLY. While the scope of this policy was originally based on the intended use to support IFR flight, it has been determined that Grid MORAs serve the same purpose and add similar value for use in applications that support both IFR and VFR flight operations.

Why this article is not helpful?